I've been reading about the "uncanny valley" (thank you, Brandon).  The best way to explain this concept is that if a copy of a real living thing is close to duplicating the real thing but is off in some way, it makes us uneasy.  When a thing is obviously not real and obviously pretending, we can feel empathy for it, think it's cute or charming.  But if a thing is too close to being real but not quite there, we feel unsettled and uncomfortable.  For example, when cgi characters move in jerky or inhuman ways or when the eyes are too high or the skin texture too smooth or Michael Jackson's post-surgery face...  A much better explanation is here in this 7 minute worthwhile video, from Penny Arcade:

So, a stylized human is more "real" than a nearly photographic human... interesting that you have to aim for just before the valley or after the valley.  For a great, short written article, go to Glimpses.
You've seen this at doll shows probably too:  what about those "newborns"?  Some are so real you expect them to move, others make something inside of you cringe (okay, ALL newborns make me cringe but that's just me) because you unconsciously key into the elements that are not quite right before you can even vocalize what they are.
And what about soft sculpture?  I think it relates to my art too, in that a stylized critter looks better than a nearly "photo" real critter, where you always see the flaws.  Think of realistic foxes, cats and dogs:  few are "dead on" (those that are take your breath away!) and most have flaws that diminish your appreciation of them FAR more than they should.  It's easier to fall in love with a caricature, an animated but unreal critter, or an entirely fantastic one (because no one can say that dragons' ears aren't exactly where you put them, so there).
Want to read more?  There's another nice article here in The Journal of Play and a video of come uncanny creations (including newborns) here with a nice write-up.
NOTE TO HALLOWE'ENERS:  we WANT to get into that uncanny valley, so all those things that are mentioned in the video and articles above are things we should consciously try to achieve!  Offset those eyes just a bit, make the skin just a bit too smooth or too lumpy, etc... and get that creeped-out feeling!

I have to say, for myself, my uncanny valley includes all those toys with the way too-big eyes and all those real dog breeds where we've bred in what I consider deformities.  I mourn for all those pugs and squished in faces that wheeze and huff by me as I'm out walking... sad, sad, sad.  I mean, if your child was born that way you'd do everything in your power to have it surgically corrected or otherwise make them more comfortable.
Posted by Scratching at the Window at 9:27 AM No comments:

I'm thrilled and honored to tell you that I'm in the June/July issue of "Start Stratford" magazine!  http://www.startstratford.com/#!karen-waschinski/crih

Maureen Argon wrote a very complimentary article about the soft sculpture making process and Ann Baggley took some awesome photos, the whole thing turned out just perfect!
In the photos that's Junebug the flying mouse and her babies, 2 mini hedgies and I'm holding Cere the Rat, and they are all just happier than you can imagine to have been included!
Go and read it! 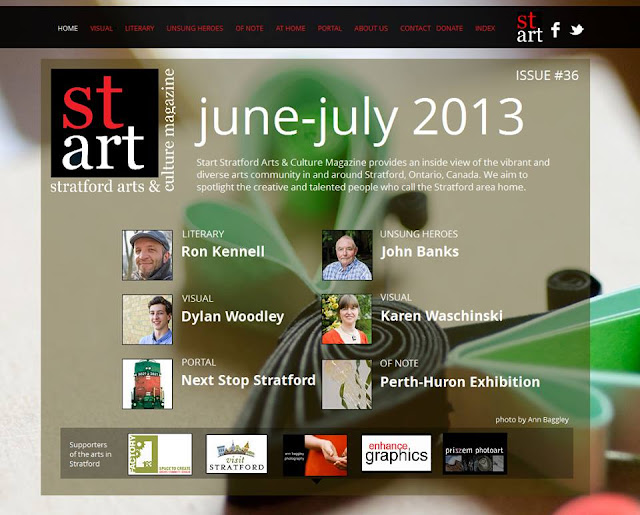 Posted by Scratching at the Window at 12:15 PM No comments:

Dollirium, sugar skulls and resting in peace in paradise

I am so honored that my Cere the Rat is included in Dollirium's Facebook banner for the current exhibit, "The Home Grown Doll Show".  Please do stop in and see all the AMAZING art, the show ends July 5th!  (I have my eye on a cute little zombie...)

And, after mending two shirts I took some time to quill, working on the Day of the Dead skull that I started earlier.  This is how far I got: 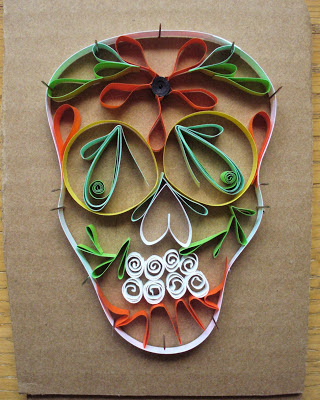 Nothing is glued yet, so things are a bit crooked but I think it looks pretty neat!  LOVE working with all these bright, happy colors!
Vacation photos?  How about a video?  Here is a mini video I took while standing in the Best Friends Animal Sanctuary's cemetery, Angels' Rest.  A stunningly peaceful place, the wind chimes soothed us as we stood and contemplated the souls no longer with us...
Posted by Scratching at the Window at 4:57 PM No comments: 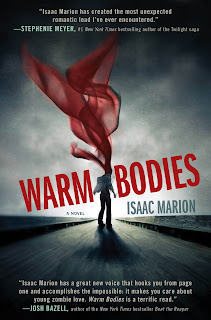 Vacation photos shortly (there are only about 1400 and that's not including the 2000 or so my sister took!).

In the meantime, while on the plane, I read "Warm Bodies" by Isaac Marion and was thoroughly impressed.  The author very effectively equates being apathetic to being like a zombie and his zombie apocalypse was created by a human world gone numb.  In his view, our society is slowing dying due to human indifference...  will we wake up in time?  I hope so...


Here's someone else's review, well said, "I believe this book is really reality-based as most Americans are zombies today. Yes, few Americans can comprehend any written material other than zombie books (and the infrequent paranormal romance, or magical-type books). Zombie is as zombie does, which accurately captures the "American spirit" or willful ignorance of today."  (quoted from here)

As far as indifference goes, I am absolutely NOT indifferent to this advertisement that apparently airs on Russian TV.  WOW!  If we got to see ads like this one, I might actually watch TV!

Posted by Scratching at the Window at 10:27 AM No comments:

We survived the Wild West!

We're back!!!  I'm just popping in to say our vacation in Utah was beyond incredible, beyond expectations!  We flew into Las Vegas, spent a few days there to acclimatize, then off to the Wild West!  We had a hotel in Kanab, Utah, and from there our tour guide Tyler took us to Zion National Park, Lake Powell, the north rim of the Grand Canyon, Bryce Canyon National Park and a day volunteering at Best Friends Animal Society.  In between we had multiple stops, including Horseshoe Bend and, my favorite, the Toadstools.

I will post more later, but here are a few pictures. 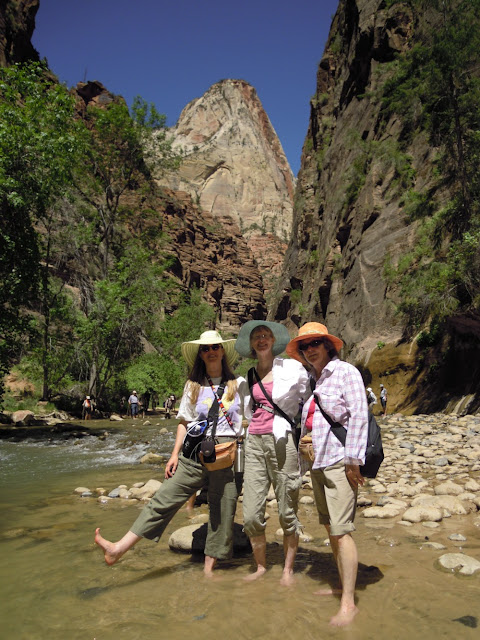 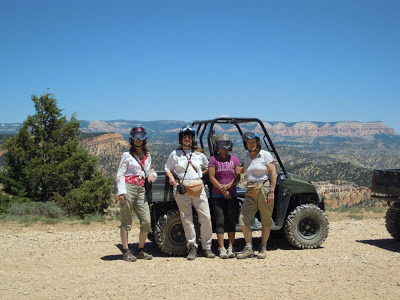 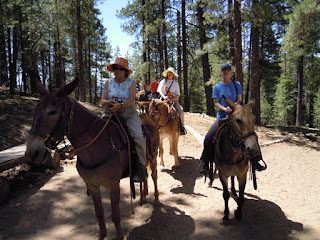 If you ever want to experience this sort of a trip, do not hesitate to contact Tyler of National Park Tourz.  He made our time in Utah amazing, and touring with a guide is incredibly relaxing with the added benefit of an insider's experience and expertise.  Just awesome! 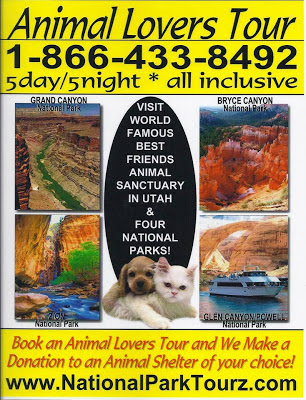 Posted by Scratching at the Window at 11:00 AM No comments:

We are the ones we have been waiting for. -- June Jordan 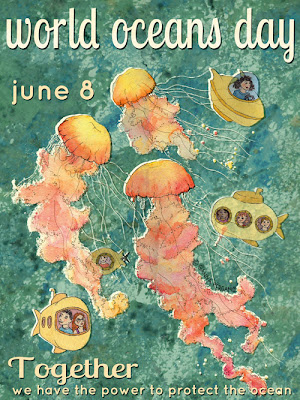 June 8 is World Oceans Day!  Read more about our imperiled oceans here: http://worldoceansday.org/
﻿
Plastics are a huge part of water pollution, so here are a few quick facts to get you thinking:

In November 2008, in Australia, a 11 1/2 foot (3.5 meter) long crocodile, which had been tagged as part of a government wildlife tracking program, was found dead.  It had consumed 25 plastic shopping and garbage bags.  This is a common fate for many wild animals.

The desert and its inhabitants have also suffered from plastic pollution.  Animals are eating the plastic left behind by visitors and tourists. They then choke on it or starve to death because the plastic blocks their intestines.  Just like seabirds in the ocean, camels, sheep, goats and cattle, as well as the protected Arabian oryx, sand gazelles and other wildlife, are dying after ingesting plastic.  From ocean to desert, there is no escape from plastic pollution.

90% of litter floating in the oceans is plastic. 70% of this will eventually sink.

Plastics that might biodegrade over time on land will not do so in sea water, as the micro-organisms that degrade plastics cannot survive in the ocean.

--from the book "Plastic Pollution" by Geof Knight 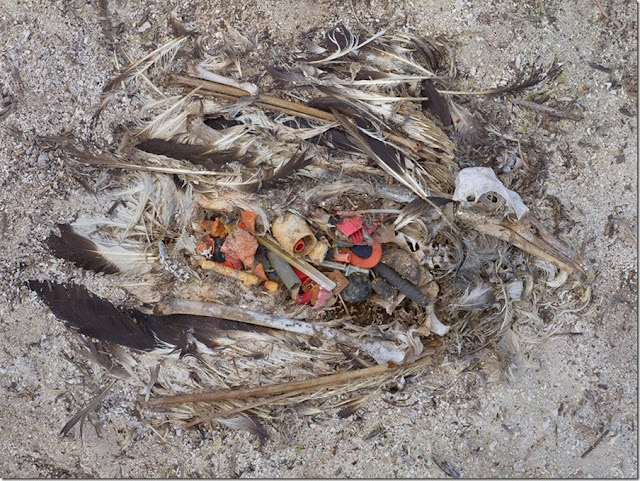 Yes, this seabird is so full of plastic it's hard to belief but sadly many water animals, as well as land animals, ingest plastic thinking its food and die with this stuff stuck in their guts.  You can see more Midway seabirds here.
Okay, enough depressing news, I'm going to temper these sad statistics and facts with some mermaid fun.  Just remember, you are powerful and you can create change, one small step at a time.
﻿
Darwin may have been quite correct in his theory that man descended from the apes of the forest, but surely woman rose from the frothy sea, as resplendent as Aphrodite on her scalloped chariot.
-- Margot Datz, A Survival Guide for Landlocked Mermaids

I am a siren, and for my adoration of
mankind, have been caught in fishing nets
one time too many. And in those fishing
nets I have learned too many unfavorable
things about human intentions and the
lack of trust and goodwill; I'm not going
to allow myself to be caught, anymore.
Sirens do well at singing the sirens' song
and dragging vile people to their deaths,
and for good reason!"
-- C. Joybell C.

The girl cocked her head the other way. I caught a glimpse of pink gills under her chin. "My sisters told me stories of humans. They said they sometimes sing to them to lure them underwater." She grinned, showing off her sharp needle-teeth. "I've been practicing. Want to hear?" -- Julie Kagawa, The Iron King 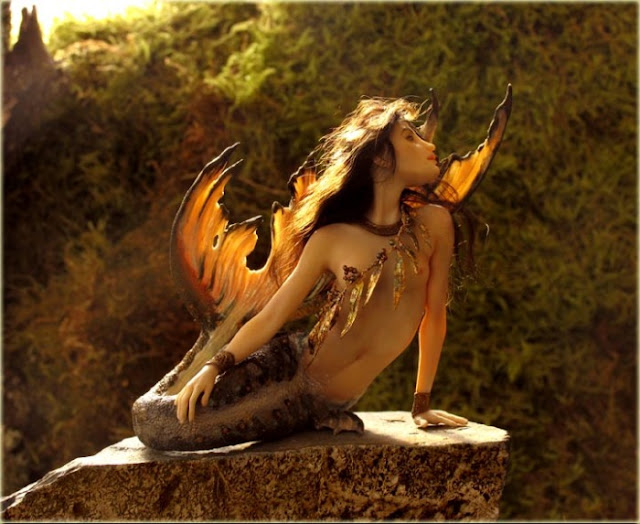 This incredible sculpture is by artist Forest Rogers.
Posted by Scratching at the Window at 7:00 PM No comments:

This blog was originally started to share with you my inspirations, preparations and creative spirit as I brought to life the critters that make up Scratching at the Window! From 2014-2019 my creative life got side-tracked as we literally took a flying leap and opened The Flying Leap Bed & Breakfast! Now I've moved beyond the B&B and are once again looking to share motivation and creative endeavours as a soft sculpture and paper artist. Enjoy!