April has been a month in over-drive, so many things happening all at once, events every weekend... I'm almost looking forward to May and a bit of calm!
One of the events I enjoy taking part in is our annual Volunteer Appreciation Week party.  This year I created this cake, an apricot peach-schnapps cake with cream cheese frosting (tinted yellow with turmeric = all natural!).  The butterflies and greenery are all made of chocolate, using the tips from Hello Cupcake by Karen Tack. 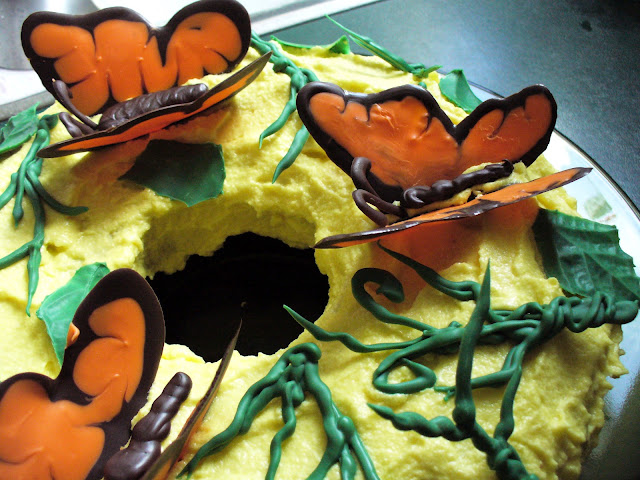 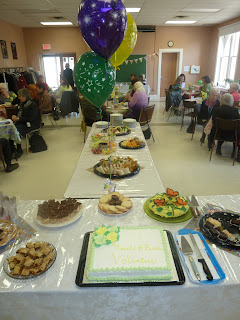 Here's the cake at the party, and yes it did taste as good as it looks!
Posted by Scratching at the Window at 1:32 PM No comments: 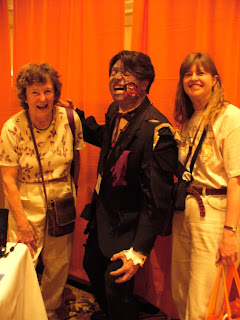 We had an awesome time at the Canadian Haunted Attractions Conference! Congratulations to all the organizers, volunteers and participants! While we could only be there on Saturday, we were thoroughly satisfied and delighted in the enthusiasm, creativity and social atmosphere. While small, it was perfect, like an excellent hors d'oeurve or fine, rich chocolate... with a morsel of candied human brain inside!

I'm going to post more images on my website! But you can mark your calendar for next year: the Conference will be on April 12-14th, 2013, in Hamilton, ON.
Posted by Scratching at the Window at 11:22 AM No comments: 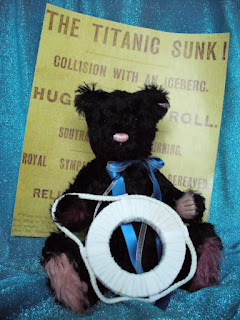 To commemorate the sinking of the Titanic, I'm proud to offer two pieces on the eve of the 100th anniversary.

Here's a sweet bear, inspired by the mourning bears offered by Steiff very shortly after the ship sank. My Mom made the life-ring, using authentic materials: cork and cloth. You can see more images by clicking here. He's $170.00US. 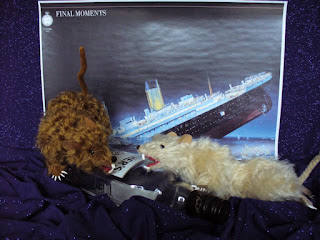 And here's a piece called: "Final Moments: the Titanic Ship Rats". Survivalists that they are, these rats are determined to make it to shore, one way or another! More images are here. The set goes for $530.00US.
If you have any questions, please ask!
Posted by Scratching at the Window at 5:21 PM No comments:

Fate: what the iceberg said...

(Sorry that the above is hard to read; please click on the above for a larger image that's much easier to read!)
Posted by Scratching at the Window at 7:16 PM No comments: 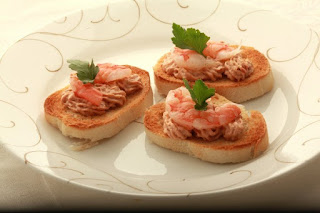 One hundred years ago, the Titianic left port today on its maiden voyage. Why not enjoy a Titanic inspired meal to acknowledge this fateful occassion? I plan to make this on Sunday, the day the ship sank.

To prepare shrimp butter: In a large skillet, heat the oil over medium heat. Add the shallot and garlic. Cook, stirring often, for about 5 minutes or until softened.
Increase the heat to high and add the shrimp. Saute the shrimp for 4-5 minutes or until the flesh is opaque. Remove the shrimp and cool. Transfer the shrimp mixture to a blender or a food processor fitted with the steel blade. Then return the skillet to the heat and add the brandy. Cook, stirring, for about 30 seconds or until the brandy is reduced to a glaze. Scrape the glaze into the shrimp mixture.
Pulse the shrimp mixture until it is coarsely chopped. Add the cream cheese, butter, tomato paste, salt, pepper and vanilla. Process until almost smooth. Set aside.

To prepare the canapés: Place the baguette slices on a baking sheet and toast under the broiler for 1 minute per side or until lightly golden. Remove from broiler and set aside. Drizzle the lime juice over the cooked shrimp halves; stir and reserve.
To assemble canapé s: Place the shrimp butter in a pastry bag fitted with a decorative tube. Pipe the shrimp butter onto the toasted baguette slices, or spread mixture on slices using a table knife. Top each with a cooked shrimp half, parsley leaf and small amount of caviar.
Makes: 20 canapes / Preparation time: 25 minutes / Total time: 1 hour

From “Last Dinner on the Titanic: Menus and Recipes from the Great Liner” by Rick Archbold and Dana McCauley
http://bangordailynews.com/2012/03/27/living/a-meal-to-remember-100-years-later-dinners-re-create-the-last-meal-on-the-titanic/

Posted by Scratching at the Window at 12:19 PM No comments:

So sad to contemplate...

The actions that led to the Titanic's sinking claimed not only human lives but also those of innocent animals. A number of first and second class passengers had their dogs with them, 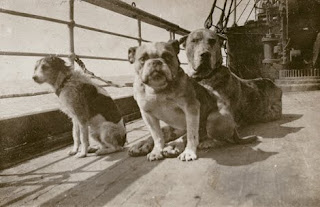 and some were bringing livestock along, namely poultry.

One account I read stated that there were so many dogs aboard, a dog show was planned for April 15th.
("Story of the Titanic", with Dr. Eric Kentley as Consultant and Steve Noon as illustrator) There was also at least one cat. 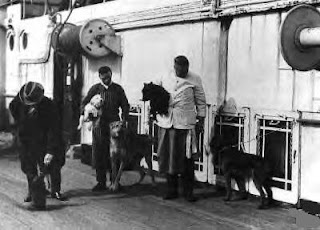 "Very few of Titanic's animals survived the ship's sinking. Three of the dogs were taken aboard lifeboats by their owners. Margaret Hays' Pomeranian got away safely in Lifeboat 7 and lived until 1919, while Elizabeth Rothschild refused to board Lifeboat 6 unless her dog was allowed to come too. (Her husband was left on board and died.) Henry and Myra Harker brought their Pekingese aboard Lifeboat 3 but Helen Bishop had to abandon Frou-Frou in her cabin, much to their mutual distress. The dog made an unsuccessful bid to stop her by holding on to her dress with his teeth until the seam tore. Afterwards Bishop spoke of her sorrow: "The loss of my little dog hurt me very much. I will never forget how he dragged on my clothes. He so wanted to accompany me."

None of the other animals survived. At some point during the sinking someone decided to free the dogs from their kennels, leading to the surreal sight of a pack of excited dogs racing up and down the slanting deck as the ship went down. One female passenger is said to have refused to be parted from her dog and chose to stay aboard. Several days later, as the SS Bremen passed through an area still strewn with debris and bodies floating in the water, passengers saw the body of a woman tightly holding a large "shaggy dog" in her arms. Robert Daniel's bulldog Gamin de Pycombe was last seen in the water swimming for his life after the ship went down."

And let us not forget the rats! "Finally, like any other ship of the time, Titanic had a substantial population of rats. One was seen running across the Third Class Dining Room on the evening of the sinking, to the shock and amazement of the diners. Some of the women who saw it burst into tears, while men tried to capture the rat, but failed."

Quoted sections are from: http://en.wikipedia.org/wiki/Animals_aboard_the_RMS_Titanic
Posted by Scratching at the Window at 7:59 AM No comments: 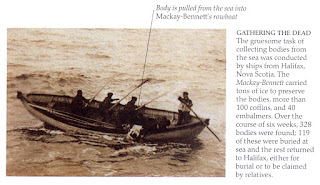 Continuing with the gruesome fascination with the Titanic and her doomed maiden voyage, reading about all the circumstances leading up to the tragedy is like going down a checklist of all the things NOT to do and checking them off! Wow! (Some writers are equating this to our current total disregard to what we're doing to the planet!)

So, what about the dead? Bodies were fished out of the ocean to be identified and brought to land or buried at sea. Individuals were identified by the objects found on them, including monographed handkerchiefs and engraved jewelry. Obviously, many of the 3rd class passengers could not be identified in this way and were simply dumped back into the icy waters. 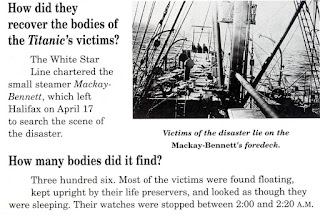 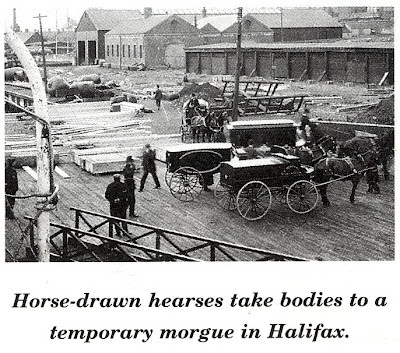 A good website for information is http://www.encyclopedia-titanica.org/ where you can look up individual names, if the person survived, what lifeboat the person was on, etc...
Posted by Scratching at the Window at 5:30 PM No comments: 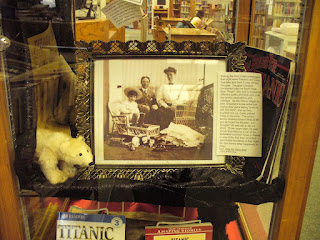 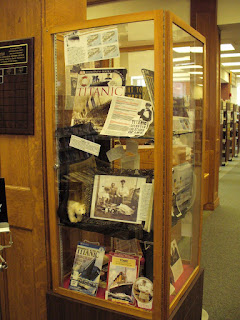 In the April issue of Teddy Bear Review, an article was printed concerning the 100th anniversary of the sinking of the Titanic and Steiff's creation of mourning bears. 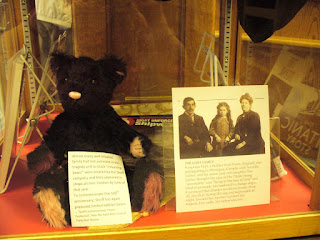 Death, doom, destruction and Teddy bears! Yippy! I was so in my element reading this article, it transformed me from a "who cares?" to a "wow, this is cool!"! Ah, the power of the written word! 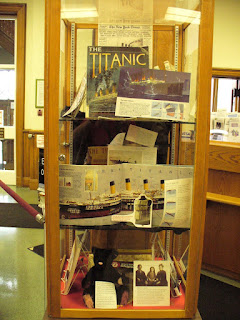 At the Library, I created a display revolving around the toy animals in the photos and the people in those photos. This display turned out beautifully, very eye-catching, informative and respectful. 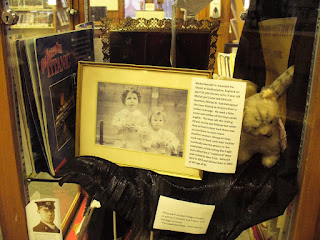 A Steiff Polar Bear (1990s issue?), an unknown well-loved cat and my own Midsummer mohair black bear are enjoying the attention.
Posted by Scratching at the Window at 7:29 AM 2 comments: 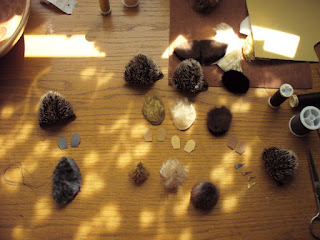 The dappled sunlight through my blinds created this interesting pattern on my desk as I worked on hedgies Monday morning.

By mid-day, the 4 little critters had ears 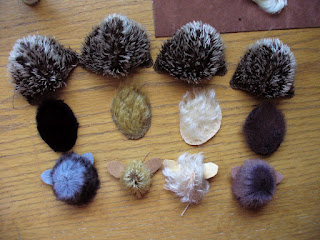 and by the end of the day, eyes and noses!
Posted by Scratching at the Window at 7:41 PM No comments:

In the past, I've made bat-head brooches based on the Western Pipistrelle, the Silver-Haired, and the Spotted Bats. (You can see them here.)
I'm now hoping to create the likeness of two more species: the 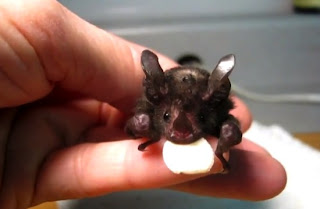 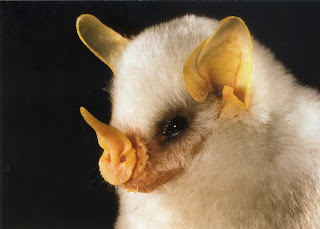 I'll keep you posted as they come to life and you can let me know how accurately they turn out!


Posted by Scratching at the Window at 6:06 PM No comments:

This blog was originally started to share with you my inspirations, preparations and creative spirit as I brought to life the critters that make up Scratching at the Window! From 2014-2019 my creative life got side-tracked as we literally took a flying leap and opened The Flying Leap Bed & Breakfast! Now I've moved beyond the B&B and am once again looking to share motivation and creative endeavours as a soft sculpture and paper artist. Enjoy!